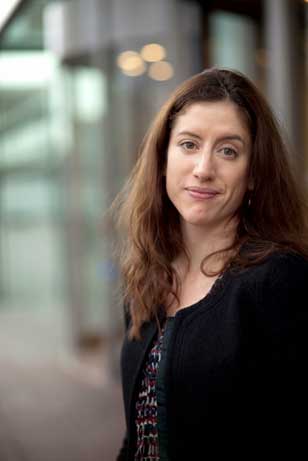 Could you tell us about your personal background, education and career up until now?
I grew up in Sweden, my family left the city of Stockholm when I was 5 years old and moved to rural Gotland where I went to school! The nature in Gotland is amazing and I go there every summer. After finishing high school, I left for the United Kingdom for a one-year sabbatical (gap year where I worked as a rider-student for among others the British Three-day Olympic rider William Fox-Pitt), and thereafter I went to Law School in Stockholm (Stockholm University). After Law School, I worked in a District Court for about a year and then attended King’s College London to complete an LLM in EU law. I then moved back to Sweden and worked another year in a court and for a while in a law firm before I applied for a DPhil (PhD) at Oxford. I started my doctorate in 2005 (time flies) and have never regretted the academic career.

You are from Sweden, but how did you become Professor of European Constitutional Law and Justice at VU in The Netherlands? Was there a specific reason to live and work in The Netherlands over Sweden?
I was very fortunate to meet Elies van Sliedregt from the VU at Somerville College where she was a visiting fellow and she told me about the vacancy for an Assistant Professorship in EU law at the VU. I applied and intended to stay only a couple of years. I had never been to The Netherlands before my interview. I have been extremely lucky to get funding from the Dutch Research Council and later also applied for a University Research Chair at the VU, which was awarded to me, and I was promoted to full-time professor in 2014 as the Professor of EU Constitutional Law and Justice. The Swedes would have had to have given me a wonderful offer to beat that! So to answer your question, the reason is that I think that the Dutch academia is very international.

Why did you study law and why did you pursue a legal career? Has the law always been your passion? Is law in your personal background (e.g. did your parents or relatives study law)?
I am the first lawyer in my family (although one of my cousins is now a lawyer as well). I was not sure that I wanted to study law, so in my first year at University I also studied History of Ideas and Cultural Legal Studies. The more I studied law, however, the more interested I became. Early on in my studies, I was interested in becoming a public prosecutor. After my brief time in a court, I changed my mind and felt I would not do a good job in that position. Because of my engagement with equestrian sport, I have also had a brief career as an equestrian sport lawyer. As with most subjects, the more one studies it and understands it, the more interesting it becomes.

If you did not study law, what would you have studied?
Political science, philosophy or veterinary medicine.

What extra-curricular activities did you do at law school?
I was active in Moot Court competitions and competed in the national competitions. However, I regret I was not active in the Student Union.

What was it like to study in London and Oxford and how did your education there compare to your legal education in Sweden?
I should not say this, but I learned the ability to think critically at the British universities where the classes (in the LLM) were not as huge as at Swedish law schools. I also learned to write essays that were well structured.

Oxford has a collegiate system and you chose Somerville College – why did you choose this particular college and what was it like to study there?
I did my PhD at Oxford so I think it is probably a bit different from the other degrees in that one is not following courses except for the first year. My time there was fantastic, and very intellectually rewarding. I chose Somerville College because my supervisor was based there. I did not know that one can choose any college one prefers (those who apply from within Oxford usually prefer the College with the best accommodation). Somerville is a rather modern one and the atmosphere is very relaxed.

What did you research for your PhD at Oxford and what does your current research focus on? How do they compare to each other?
My PhD was on the Constitutional dimension of European criminal law. I am still writing on the same area but I have broadened my interests and also focus on constitutional law and theory in the EU. The topic of EU Criminal Law is, however, a hot subject at the moment.

What made you choose a career in legal academia over legal practice and why?
I have not ruled out that at some point I will combine the two. What I missed in practice was the possibility to deepen your knowledge and not have to think so much about costs. As an academic one earns less but has usually a lot more freedom.

Could you tell the readers of Incretus something about the VU Honours Programme course Human Rights and Globalization that you are currently teaching? What other courses do you currently teach?
I teach the Human Rights and Globalization course, but this is the only honours course I teach at the VU. It was the first time I taught this year. I really enjoyed it and felt the diverse group of students really enriched the discussion.

Human Rights is a very broad subject, but what part or aspect in the field of human rights do you find interesting and why?
Many parts are interesting. I am particularly interested in the justification that the State has to offer to its citizens when limiting rights as well as the definition of human rights.

Your legal expertise and interests are EU law, Area of Freedom, Security and Justice, criminal law, migration, risk regulation, constitutional law theory, political theory. What currently stands out to you in these legal fields (is there a specific case or theory that you find most interesting in these legal fields)?
I am very interested in the concept of non-domination when studying this area as well as the concept of justice.

What do you like to research the most within these legal fields? How do you approach your research (do you use a particular method)?
I am using a legal method combined with interdisciplinary insights. My main project at present is a monograph on the Area of Freedom, Security and Justice and the right to justification.

Besides teaching at VU, do you have any other legal or academic positions (in The Netherlands or another country)?
I am a visiting lecturer at a number of Universities, for example Amsterdam University College, and recently at Uppsala University and Haifa Law school.

You are currently participating in the faculty research programme Boundaries of Law and in activities of the Centre for European Legal Studies. You are also a VU Amsterdam representative at the Centre for External relations (CLEER), Asser institute and a member of the Meijers committee of human rights, international migration and criminal law. Could you explain these activities and your role in these organizations to our readers?
With the Centre for European Legal Studies, I organize a number of workshops and seminars together with Dr Bertjan Wolthuis. All law students at the VU are very welcome to these events. As for the other organizations, I contribute with my expertise at meetings and per email.

Your expertise is a combination of EU Law and Criminal Law. To what extent does EU Law influence national criminal law and vice versa? How do you think these legal fields will develop in the future?
The field is one of the newest in EU law so it was interesting to write a PhD on it in 2005. I think we will see a lot more EU cooperation in the area mainly due to the threat of terrorism in Europe.

What are the current main developments and issues in EU and Criminal Law?
A European public prosecutor for example. More EU cooperation on the European arrest warrant and mutual recognition instruments.

Donald Trump was recently elected as President of the United States; Britain recently held a Brexit referendum and chose to leave the EU. How do you think these transatlantic events will impact the European Union/EU Law and its future?
It is very depressing, and makes one wonder how the EU will survive. Because of the global issues of migration crisis and terror threat, however, I think the EU will continue to be a player.

Besides academia and the law, what do you do in your spare time? What are your hobbies?
Horse riding and reading novels!

Could you recommend a book or case, within the fields of law that you are currently teaching or researching, to our readers? Could you explain why this book/case would be of interest to our readers and law students at VU?
I just read an interesting Swedish case from the EU court of Justice Cases C 203/15 and C 698/15, 21 Dec 2016. The case concerns the storing of personal data and the Charter of Fundamental Rights and the question of how national authorities should deal with data that is transferred outside the EU.

Do you have any advice for VU law students regarding their legal career and education?
Read as widely as possible and attend seminars and talks that might not seem relevant to your exam. You will meet new people who might influence or guide you in your future career!

Editor’s note: This interview with Professor Herlin-Karnell was published in 2017